Update: I have both the on-site archeologist’s contact info plus the Principle Investigator’s as well. The archeologist called the PI at their office and she was so excited by the finds she had to come down and take a look for herself! If you’d like to contact them please send me an email and I’ll give you their information:

So I ended up having to work from home today because my dogs wouldn’t come in. Surveyors for the pipeline were surveying next door and my dogs kept running to-and-fro barking and generally going nuts. And they conveniently forgot all their “come when called” training, so I was stuck for it.

This turned out to be a blessing in disguise. I got a little bit worried when I saw they were surveying very close to my fence line: 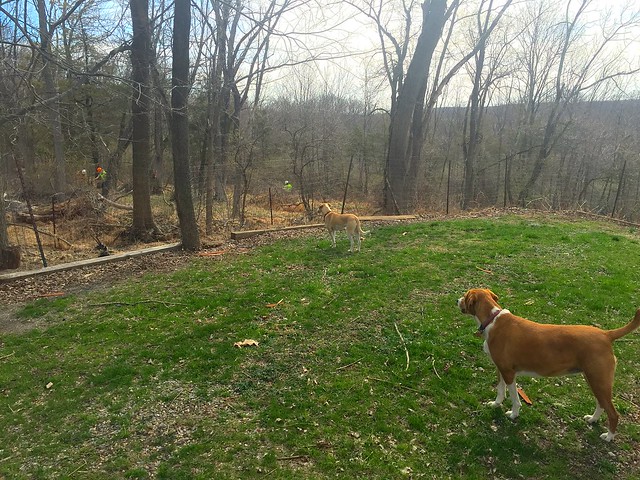 Some people on Facebook were asking questions about who they might be exactly and where they were from so I took a stroll up our 275′ driveway to find out.

As it turns out the head of the survey group was a very pleasant and informative guy. The team worked for URS and was doing an archeological and historical survey on the route. This is not part of the main pipeline survey team but instead is what PennEast calls “Red Tape” surveys – the pain in the ass (to them) regulations they must abide by when planning the route.

He indicated that PennEast generally hates them because they constantly find problems with the route. “Up in Reigelsville PA we found right on top of the route was an old tavern from the 1700s. The roof was intact but the windows were all gone. But the root cellar was 100% intact, I’ve never seen that before. It’s of incredible historical value to find intact features like that. We immediately had PennEast move the route away from there”.

We started talking about my area and he broke out into a huge grin. He looked absolutely gleeful and said “We have some bad days. Some days you’re in a swamp up to you knees and you know you’re not going to find anything. But today – today is a good day! We’ve found 50 rock quarries back there [west of Hewitt Road] dating back to the 1700s. And that’s not all. One of your neighbors mentioned a cobble stone road. That’s incredibly rare, we’ve never found an intact one before. We’re trying to find it now”.

As he said this a woman from the survey team came over from the woods. “We found it!”.

If anything the URS manager looked even more excited. “You found the road?”.

“Yeah,” she replied. “You can’t see it for all the trees but one of our guys is standing right on it. It’s not very far from here at all!”.

He then gave instructions to clear off about 5 meters of it for further study.

“An intact cobblestone road from the 1700s, that’s something. There are researchers who are going to be interested in this”.

I started chatting with him some more and mentioned that the PennEast people told me they just pick the route using Google Earth and finding the straightest lines they can. He laughed and shook his head and basically went into great detail about how dumb the route planning is. He said he has mixed feelings about the job, he clearly didn’t like helping pipeline companies in any way but at the same time he’s is helping out tremendously in saving areas of historical value from construction. We started talking about the construction process, and he said “Yeah, if they took the route through here all of the features we’re talking about would be completely obliterated”.

He continued, “And you know, we’re seeing the closer we get to Philadelphia the more stuff we’re finding. It’s simply incredible the things we’re seeing in the past few days!”.

It’s not clear what the end result of this will be. “Sometimes they move the route, other times they don’t”. When they don’t we at least have the power to pause the whole process. We then go in try to uncover and save whatever we can, and most importantly we document exactly where in the soil we find it. More than the item itself the exact location is extremely important to fix it’s historical significance”.

We can only hope that URS finds more and more of these sites and puts yet another kink in PennEast’s plans! This pipeline is not a “done deal” and this is just one of many obstacles PennEast is going to have to overcome to get their way. They’ve got a mountain to climb and we’re all helping to build it higher and higher every day. Keep it up everyone!