The state of Pennsylvania has a long and difficult history with energy projects. They’ve endured disastrous coal mining incidents such as the infamous Knox Mine Disaster in 1959, where the Susquehanna River broke through and inundated a network of mines, killing a dozen workers. The Centralia mine fire that started in 1962 involves 3,700 acres of land, where coal seams up to 300 feet down keep burning. Today, 53 years later that coal is still burning, and could burn for centuries to come.

And today fracking operations dot their landscape and poison their wells. Pipelines stretch out in all directions to spread the pain away from the immediate fracking wells to engulf people all over the state. Sometimes when I talk to Pennsylvanians on this subject I get a strong vibe akin to talking to a terminal patient in the hospital, there’s a sense of someone who has fought a series of long hard battles and who knows the end isn’t going to go well. 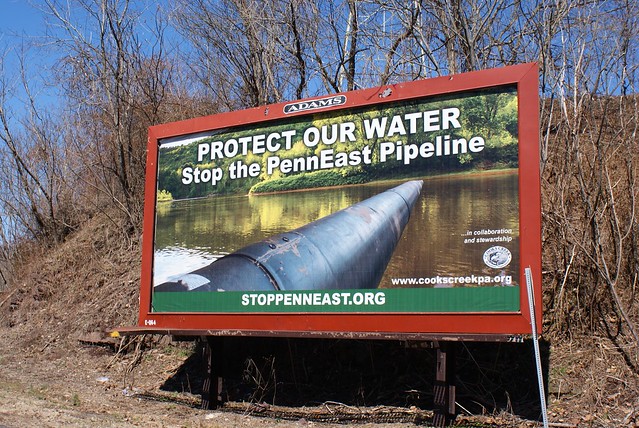 Most recently, William G. Dohe, the Chairman of the Environmental Advisory Council of Easton, Pennsylvania, has filed a comment with the FERC declaring their organization is formally opposed to the pipeline. Mr. Dohe writes:

After careful review of information available to date, the Environmental Advisory Council of Easton, Pennsylvania wishes to record our opposition to the proposed PennEast Pipeline. We are concerned that the proposed Environmental Impact Statement (EIS) will be incomplete and not adequately weigh the direct economic benefit of PennEast Pipeline Company LLC to the risks and costs to the communities that will be forced to play its host.

The council then enumerates a list of specific areas of concern they want the FERC to force PennEast to address:

Let’s hope that the FERC takes heed of this and similar submissions and forces PennEast to submit detailed studies and analysis of all of these topics.  On the issue of economic benefits in particular I would go even further than Mr. Dohe’s request for an audit of PennEast’s Drexel University study.  I would demand that an independent study be conducted, paid for by PennEast but selected by a neutral third party, which considers the true economic impact to our communities including all of the negative impacts the construction will entail in our region, including but not limited to loss of business due to construction near businesses, loss of tourism dollars in affected tourist destinations, funds spent by local, county, and state governments to study and respond to PennEast and FERC’s scoping process which could have been spent on more constructive projects, economic impact of traffic issues during construction, and permanent economic losses incurred by properties and landowners along the permanently cleared 50′ right of way.

The EAC’s submission is available below: