In January PennEast moved the pipeline significantly in NJ to be colocated along JCP&L power lines for much of the route. Some people saw this as a good thing, at least PennEast was not cutting through virgin mature growth forest any more.

However co-location isn’t magic fairy dust. It’s not a panacea, and there can be serious issues with this approach as well.

One of them is the realities of co-locating along a power line easement. As it turns out, you cannot dig the pipeline under the electric towers. You must lay the pipeline a certain distance away to avoid electric charges building up along the pipeline (this happens anyway, but that’s for another post).

Appendix E contains plans for all sorts of different rights of way, and shows how construction will occur in all of these different circumstances. We’ll look at them all in detail in future posts, but right now I want to focus on one particular page. This page deals with the construction ROW as it will look in much of West Amwell and Hopewell NJ. This is the 285′ power line easement construction plan near electrical towers: 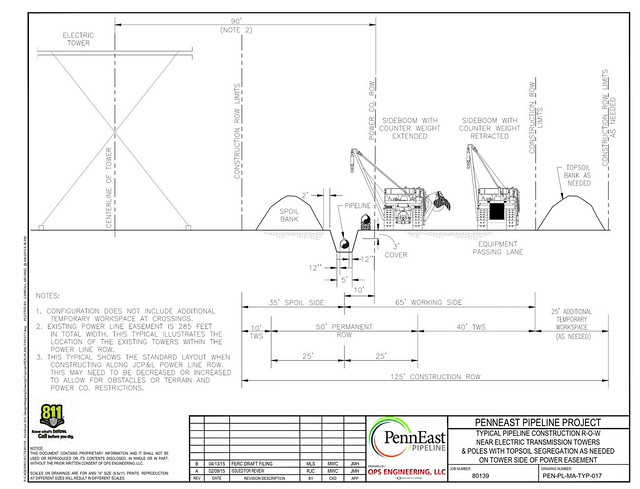 This diagram shows how PennEast will setup the construction ROW where the power line easement is 285′ wide. This isn’t widely known at the moment, but this applies to areas in West Amwell and Hopewell, including around Baldpate Mountain. The cut is only 75′ to 125′ wide but the actual easement is 285′. PennEast plans on using most of that.

If you do a bit of math against the blueprint you can see that the construction right of way will extend 195′ from the centerline of the tower, or possibly 220′ if they need a separate topsoil bank.

For the towers around West Amwell and Hopewell, the towers are centered around the existing cuts in the forest, and the cuts themselves are around 100′ wide. This puts the centerline of the towers at the 50′ mark in the cut. Since all measurements are from the centerline, this means the total cut will be expanded from 100′ to 245′-270′ (depending on if they need that topsoil pile or not).

So in reality “co-location” isn’t what you may think. What it really is is widening the existing cut by 2 1/2 to 3 times its existing size! Take a look at the route along Baldpate with the existing cut: 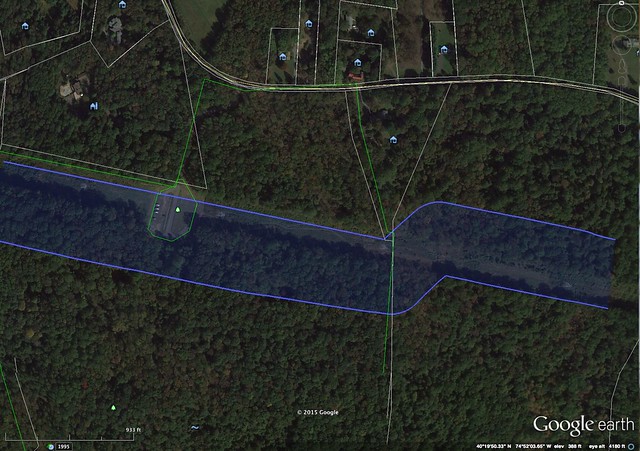 The blue zone is the pipeline 400′ wide survey corridor. As you can see, most of the corridor is outside the existing cut. This is because of the construction layout as explained above. Co-location near my house in West Amwell and along Baldpate means clear cutting out an area close to 3x as wide as is cut now, and will leave us with a cut permanently 2x as wide.

As a bonus they will be obliterating the Baldpate parking area off of Pleasant Valley Road (green roughly circular area left of center in the picture above).

There is a similar story in other areas where the easement width is smaller at 120′. PennEast will likewise be significantly broadening the cut. At the same time they will have to not only deal with the JCP&L easement but also buy an additional easement for the extra space.

2 thoughts on “Why co-location isn’t a panacea”