Low-brow politics isn’t unique to any given party, and certainly isn’t confined to just our little race in West Amwell Township.  Here in West Amwell we have a group of Democratic challengers who are using smear tactics and barrels of union money to try to force their way into the Township Committee.  In Delaware Township, it looks like smear tactics are alive and well, there too, but with the parties reversed.

A friend sent me this flyer today that’s been mailed throughout Delaware Township. 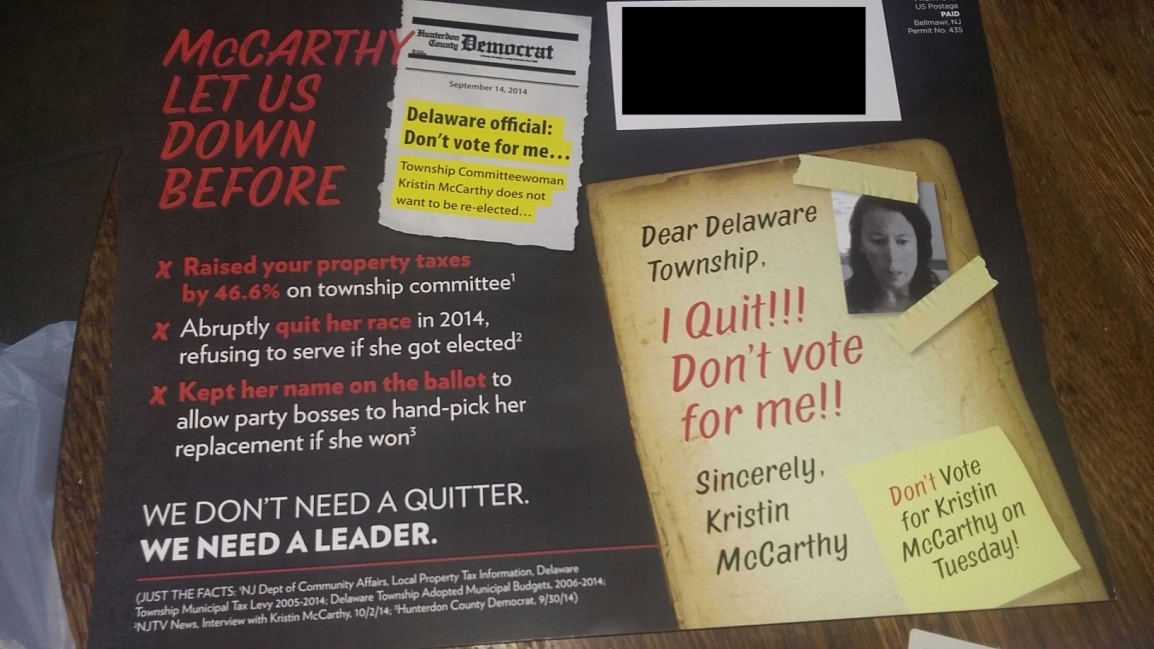 I met Kristin McCarthy through the PennEast pipeline fight, we’ve worked together in a number of different areas to beat this project, our Citizens Against the Pipeline groups have worked together with other CAPs to bring grassroots organization together.  I’ve seen first hand her passion and commitment to beating this thing, and knowing her personally I find this brochure to be appalling.  The number of misleading, inaccurate, and exaggerated things on this brochure are simply astounding.

It is extremely well known why Kristin dropped out of the Township  Committee Race.  She did it because she felt she needed to devote 100% of her available time to fighting the PennEast pipeline.  The pipeline came out of nowhere and turned all our lives upside down, and Kristin made a brave choice to push politics aside and do what was right – fight for the rights of Delaware Township residents against PennEast and FERC.

Calling her a “Quitter”?  Making it sound like she ran away from her candidacy capriciously?  Saying she “Let us down before”.

It’s all wrong, it’s all misleading, and people of Delaware Township shouldn’t believe it for a second.

The reality is that Delaware Township has been the epicenter of the effective resistance against PennEast and the CAP organizations.  DTCAP has been a hellaciously effective organization against PennEast.  They organized with astonishing rapidity, picked up speed and never looked back.  And Kristin was key in making that happen.  EVERYONE who is working hard against PennEast knows Kristin by sight and by name.

You guys – Delaware Township – are where so much of the fight against PennEast originated, and Kristin is one of the key people that made it happen.  And the only way she was able to bring DTCAP so far was upend her own political career and step down from the race.  She did what she felt was right to maximize our chances against PennEast.

Now she wants to come back to the Delaware Township committee.  I don’t live there so I don’t get to vote, but if I did I would vote for Kristin in a heartbeat.  She is the type of person you want leading a small township through adversity and beating the odds.

Don’t believe this smear campaign, sent out at the last minute to sully her good name.  Don’t look at the personal attacks, such as claiming she single handedly raised taxes all on her own while providing no context (this part of a smear is sadly very familiar to us here in West Amwell this election cycle). Take a look at Kristin’s actual record of 9 years on the Township Committee, her two years as mayor.  Take a look at the organization she built up in DTCAP.  Quitter?  You gotta be kidding me.