I received an email last night from Carla in Delaware Township.  She said that her farm was in one of the pictures I took on Sanford Road, and that there was a lot of interesting areas you couldn’t see from the road that would be impacted by the pipeline.  She offered me an invitation to come out and talk to her about her farm and the pipeline and take pictures along the way.

So my wife and I loaded up our two dogs (Fern, an American Fox hound, and Cinna, a pit bull mix) and drove on up.

When I met Carla she told me a little history of their farm. They bought the 137 acre property 16 years ago from a family who lived in Connecticut. Normally they would not be able to afford such a piece of land, but the Connecticut family worked with them and the purchase was part of a farm preservation agreement. This kept the farm permanently protected as farm land, and Carla and her husband got a farm with huge potential.

You can see their FERC submission below:

From her description the land was a bit of a mess when they got it. They’ve had to work hard to turn it into a productive farm that grows high quality hay. The same is true of the house, it was in pretty bad shape and they are still slowly renovating it into their dream home.

Their farm is long and somewhat narrow. Unfortunately the PennEast route goes right through the long part, running the entire length of the farm. It cuts right across their driveway, which will leave them unable to access their property during construction.

Carla graciously let me bring my camera and document some of the features on the property. It’s a good thing I brought my boots because the snow melt and rain has created acres and acres of mud on the property.

The Pond
A big feature of the farm and an area of deep concern related to the pipeline is a pond located on the farm. The pond is fed by Plum Brook, which is a tributary of the Wickecheoke Creek. The pipeline will be cutting across that waterway upstream from the pond, and any contamination from the construction will end up right in it. 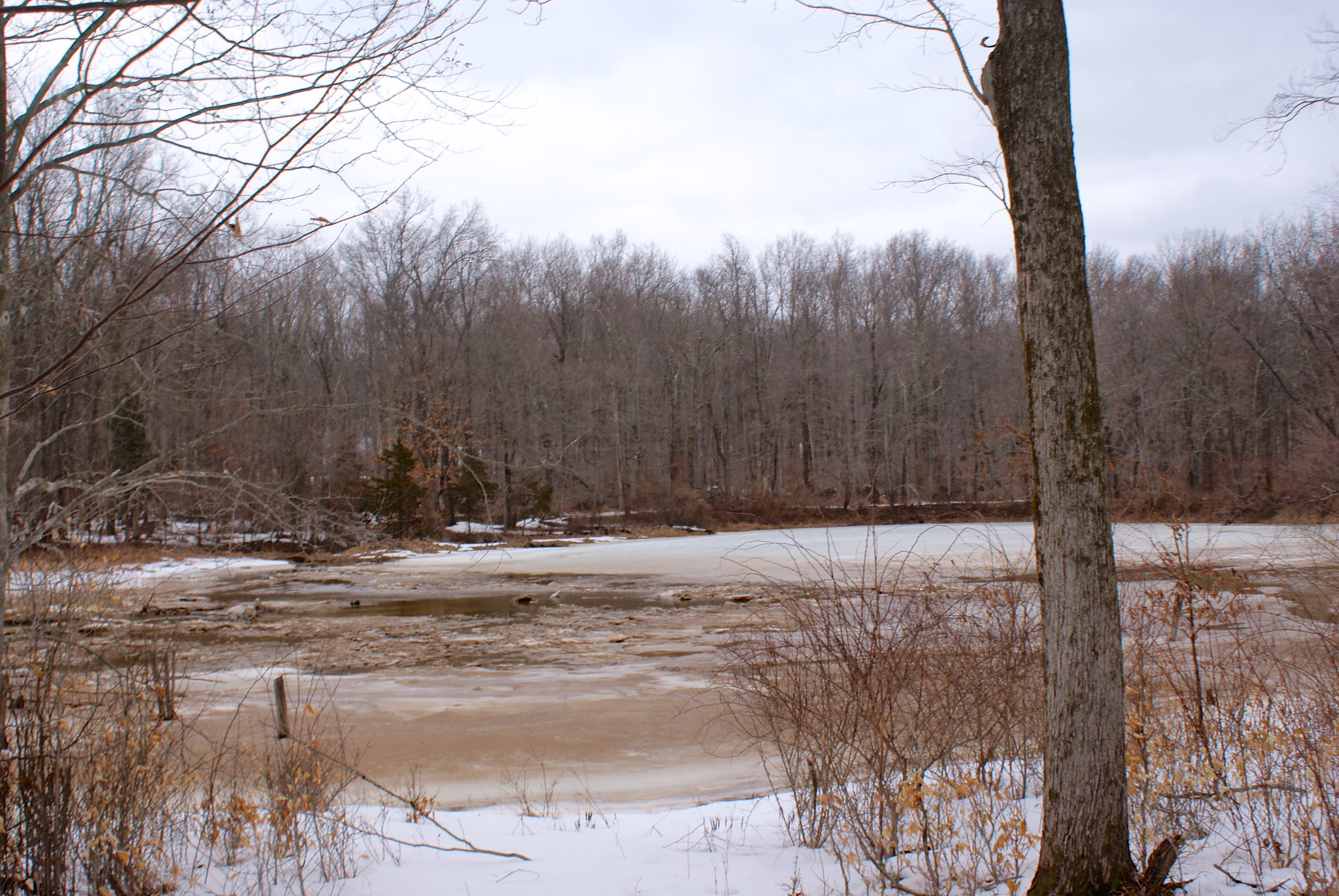 Wider view of the pond
The pond is apparently man-made, it was created by a previous tenant by damning up the stream. A beaver apparently helped as well, it took down a lot of wood in the area to beef up the damning until someone shot it some time ago. 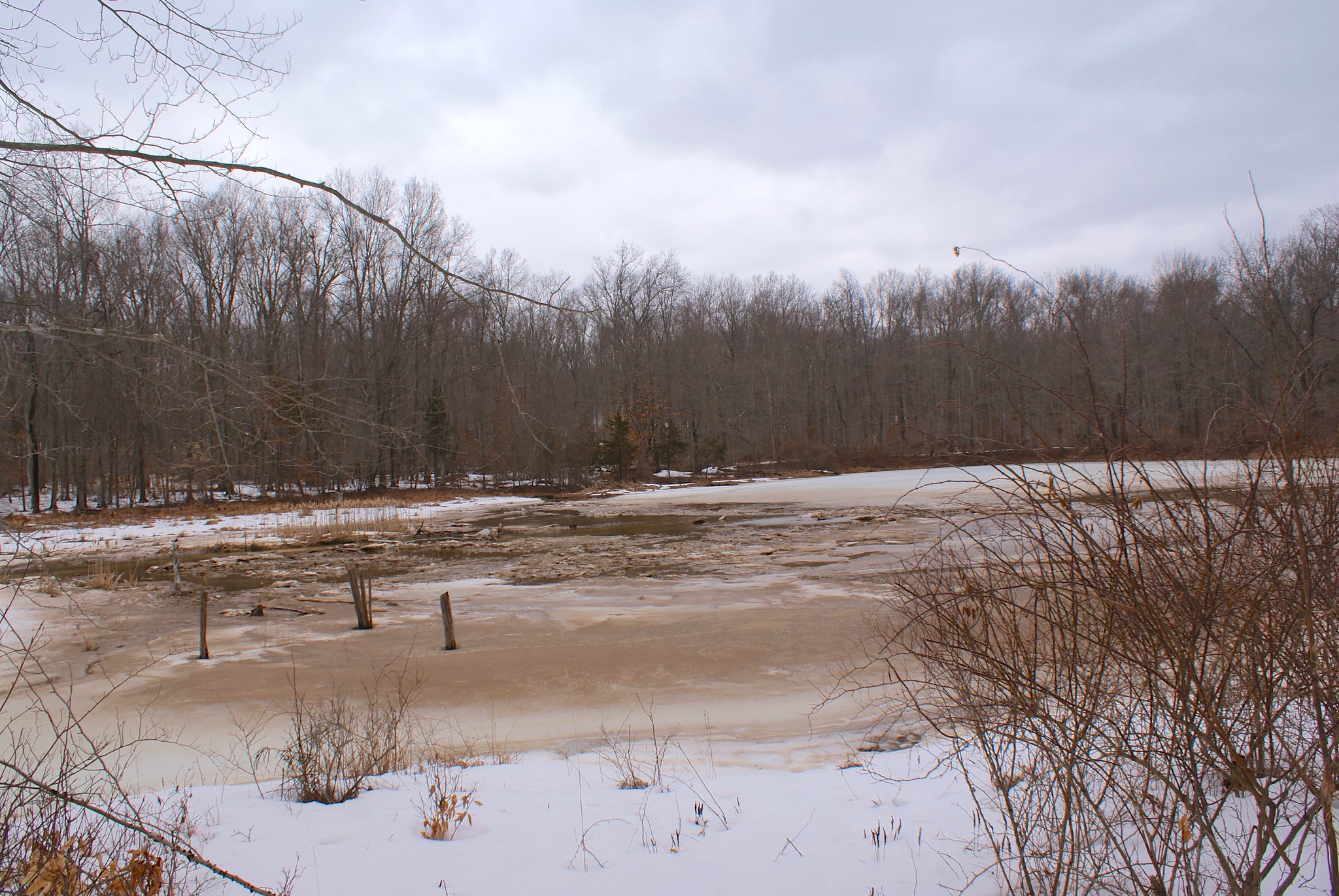 Closeup of the pond
The brook supports beavers, muskrats, and minks, and the pond contains many different critters including bass and many species of turtles. 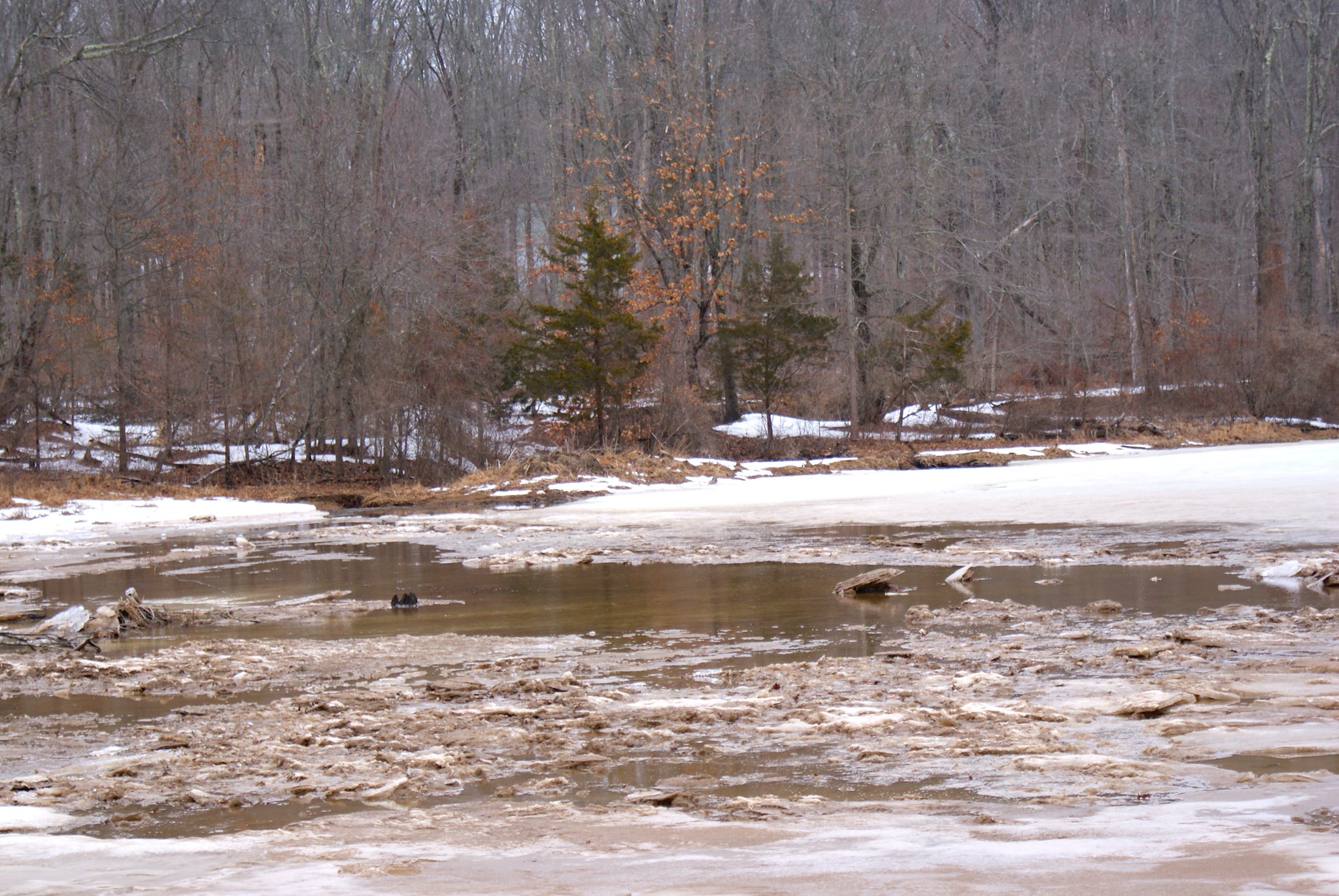 Pond alternate view
PennEast of course says that their construction is no big deal and they will “mitigate” any damages. That is PennEast’s favorite word – they get the right to invoke eminent domain and pretty much put the pipeline wherever they please, and our sole consolation is they’ll “mitigate” any issues.

The problem of course is that PennEast will only focus on the area immediately in their construction zone. If material and sediment slips down stream they won’t even look for it. So any mitigation they might do would be to fix the brook – with probably nothing done at all for the pond if they inadvertently damage it’s environment. 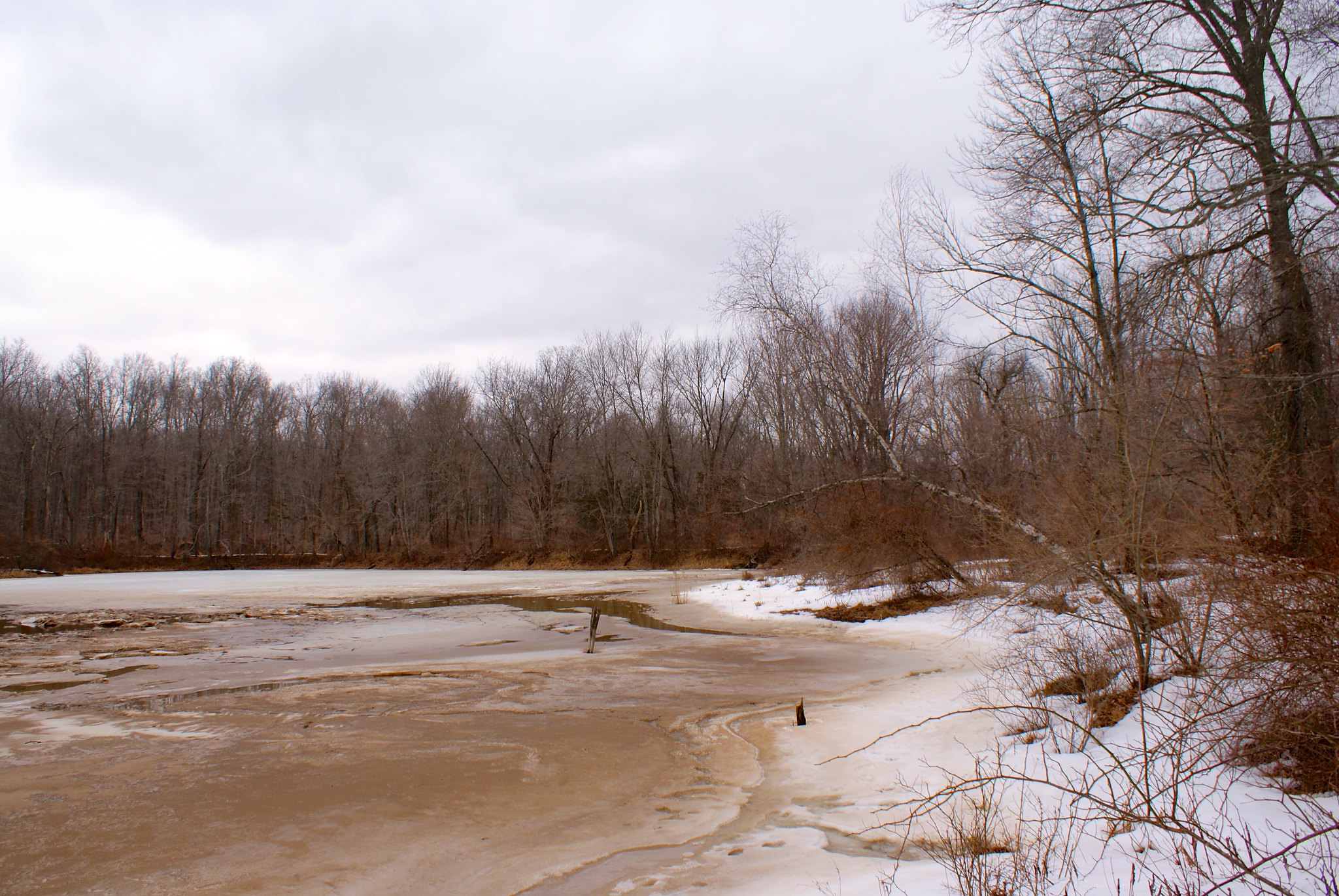 Plum Brook
The brook is actually pretty substantial in size, doubly so during these times when there’s a lot of water. You can see from how steep the banks are that it must really flow strongly during heavy rains and has carved a deep niche for itself. 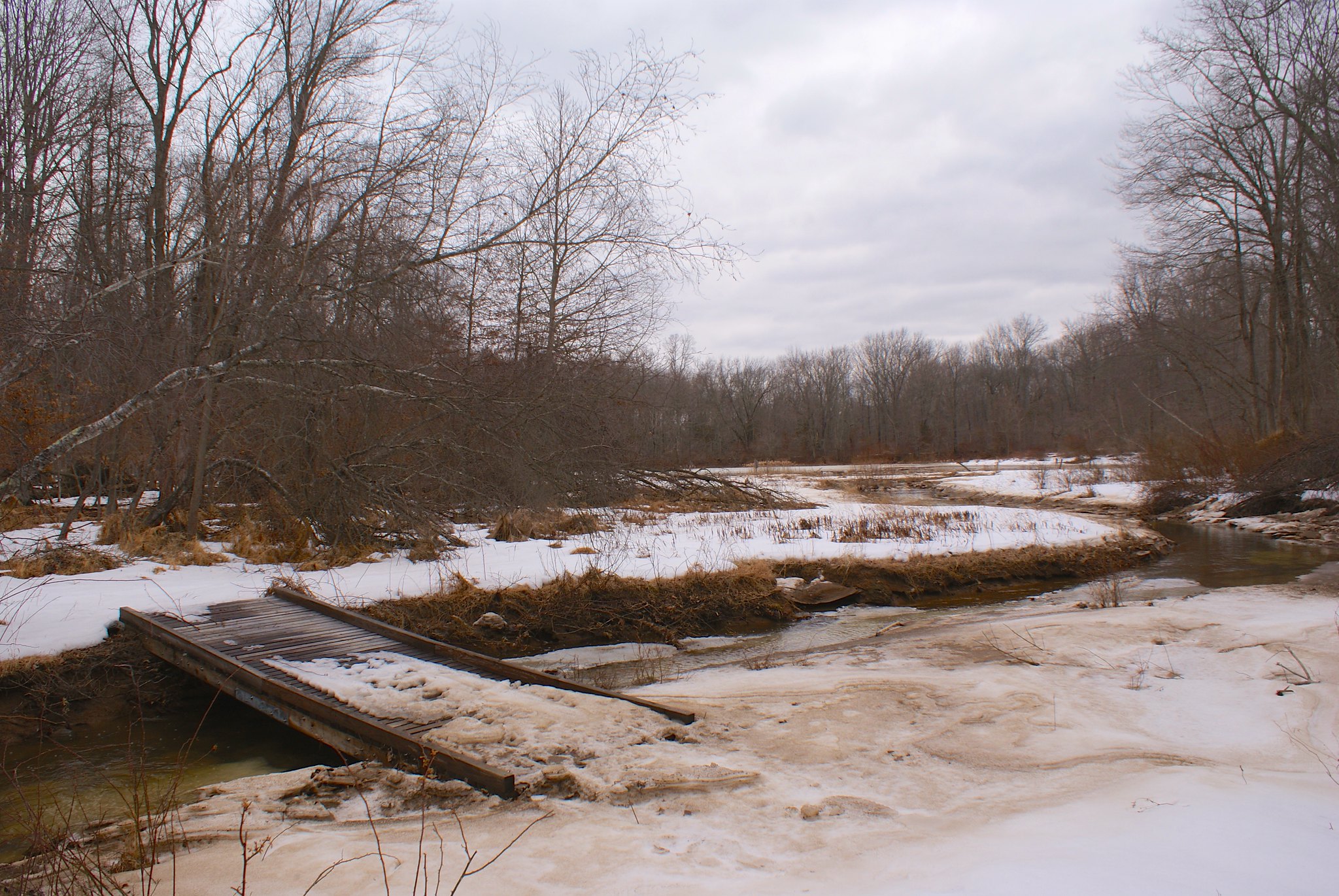 Walking along the brook
We walked along the brook to the west towards the power line easement and proposed route. Along the way we were chatting about rescue dogs and techniques to calm the most skittish ones over time. She’s got several cats and dogs in the house plus is holding a new rescue. They’re mostly smaller breed dogs, she can’t get breeds that need to run a lot outside. The problem there is the ducks and chickens on the property. One week and bigger dogs like ours would make the fowl their dinner. 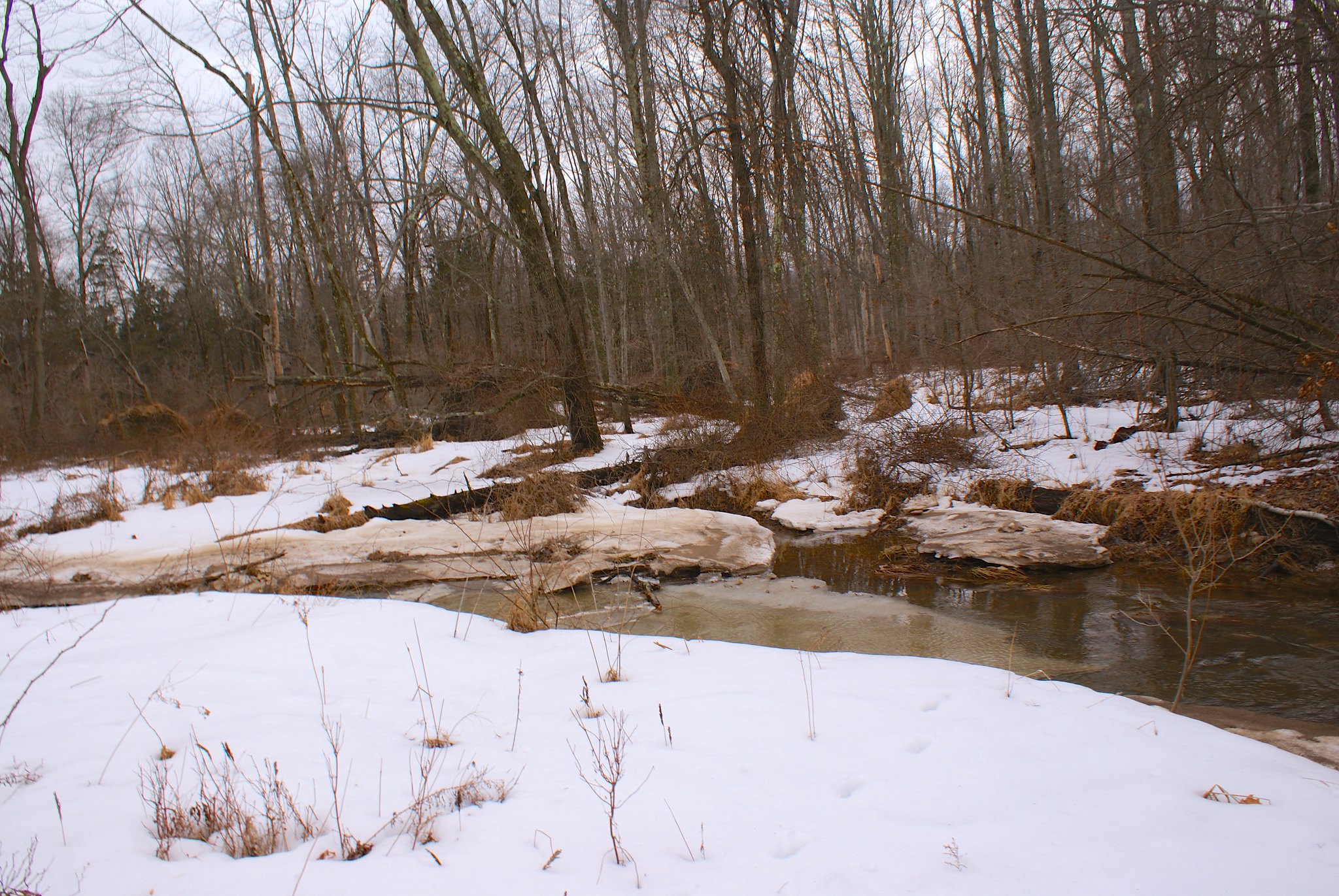 At the easement
We arrived at the easement and I had a much better view of what it looked like away from the road. As you can see the power company has let it go semi-wild. When PennEast comes through this whole area is going to be stripped bare. And, as elsewhere, it looks like they’ll need to widen the cut. 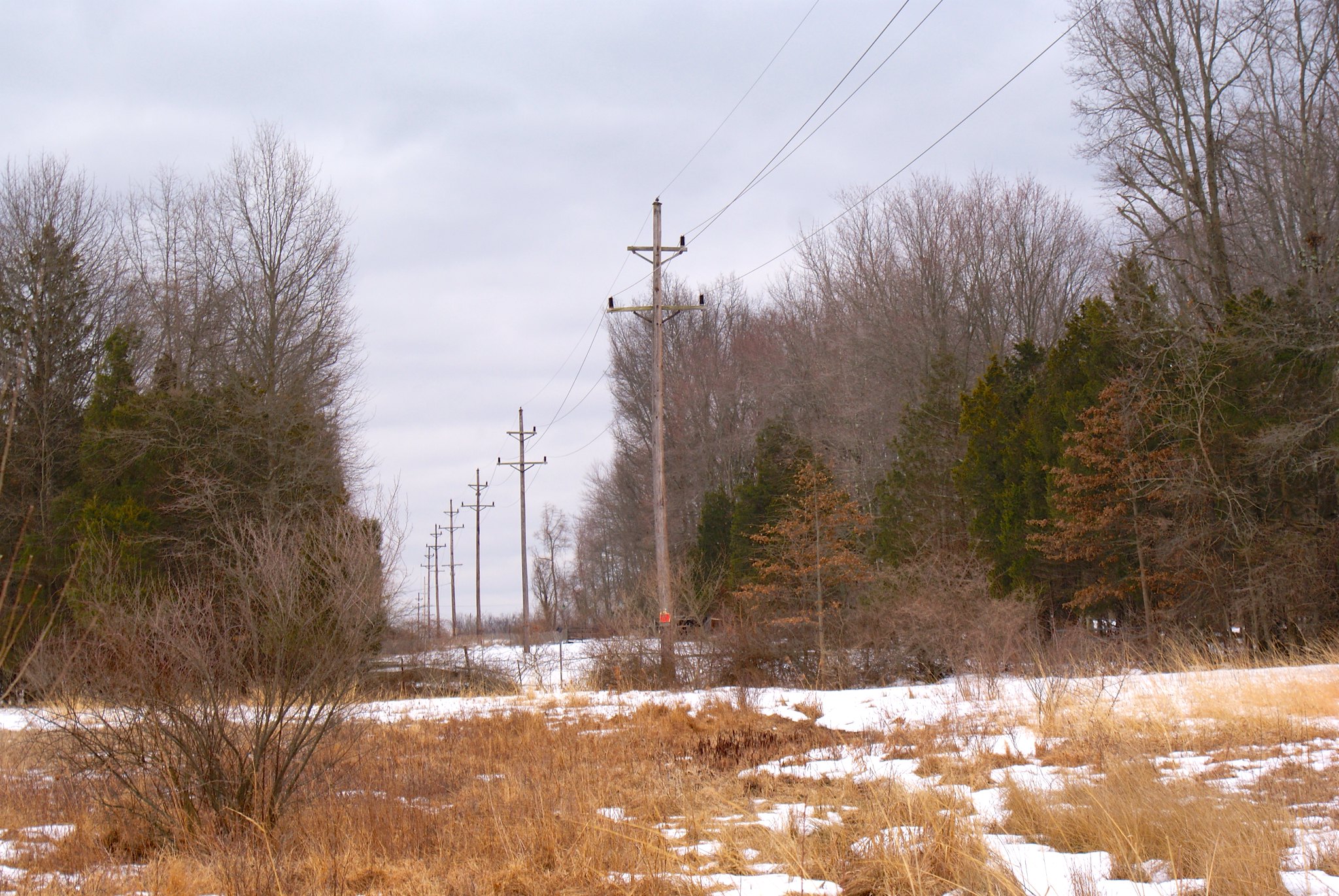 The Kestrel Nesting Boxes
Our true reason for going to the easement area was that Carla wanted to show me the Kestrel Nesting Boxes. Apparently there is a state program that is run to help preserve Kestrels. They help make these nesting boxes, and they also band birds in the wild for tracking. You can read more about the state’s kestrel program in the area here. As you can see in the document the kestrel is a State Threatened species.

Here’s a kestrel box on a telephone pole right along the pipeline route. I wonder how PennEast is going to “mitigate” damage to these birds given their breeding and living grounds are right on top of the route. 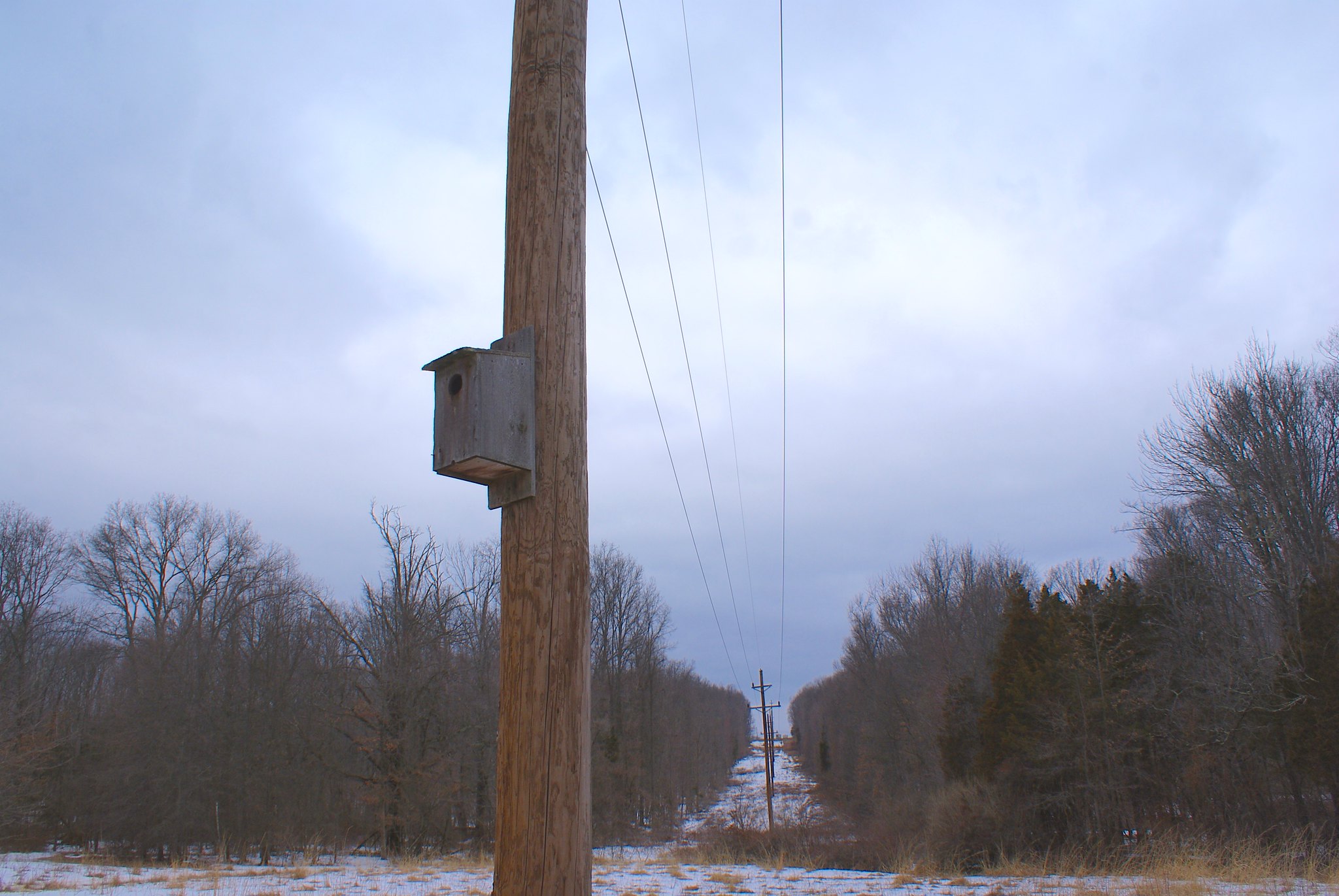 Alternate view of kestrel box
Another view of the box. There are several of these strung along the route. 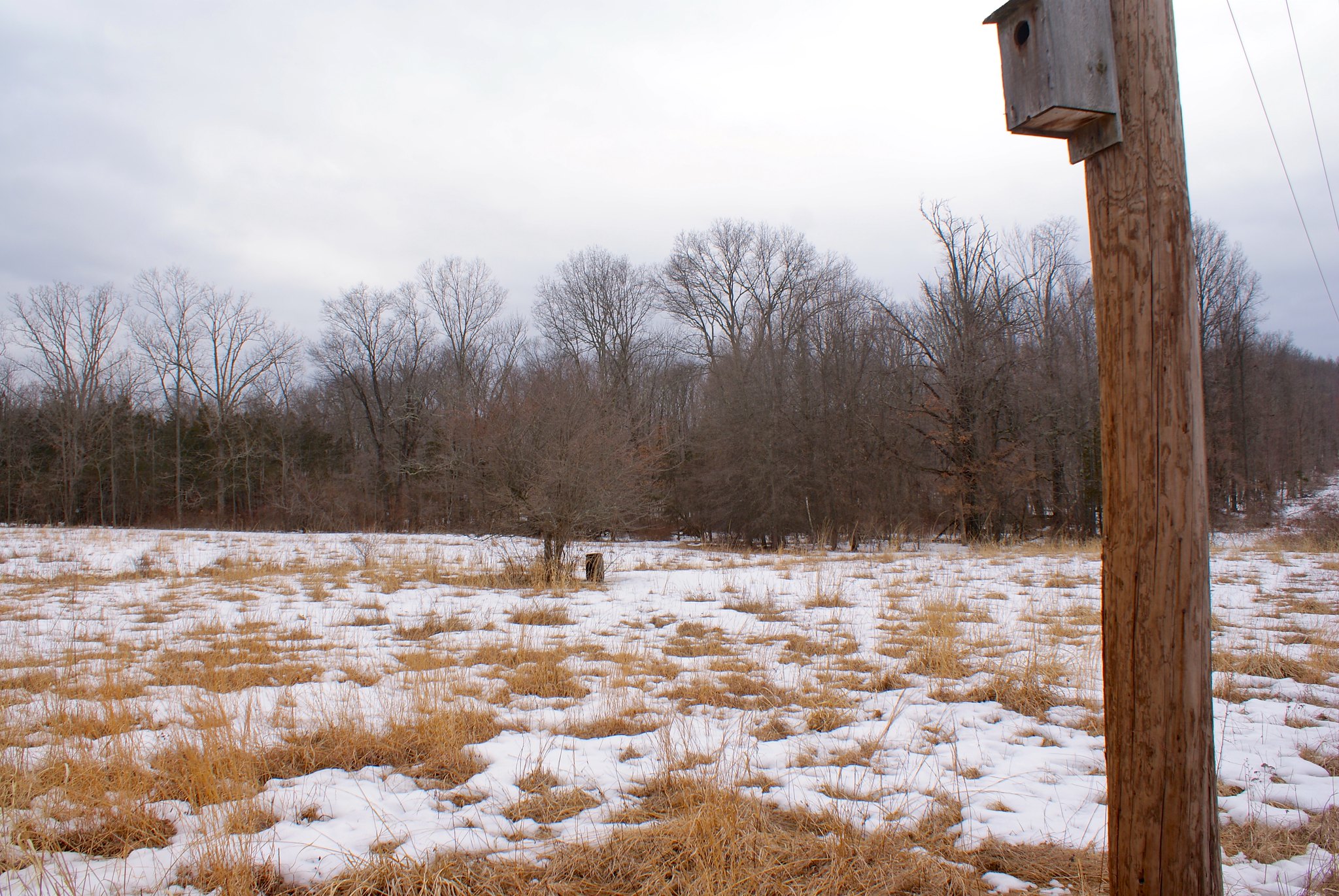 Krestrel Banding
Carla sent me some snaps of the Kestrel banding process. 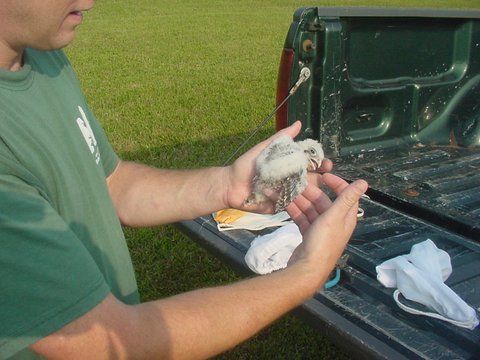 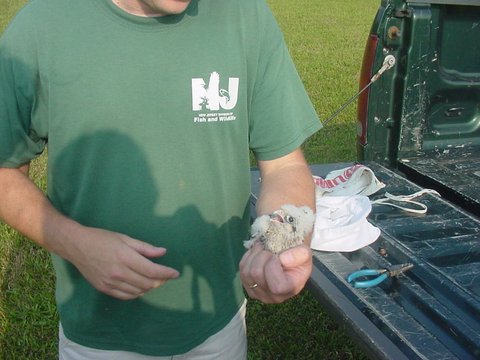 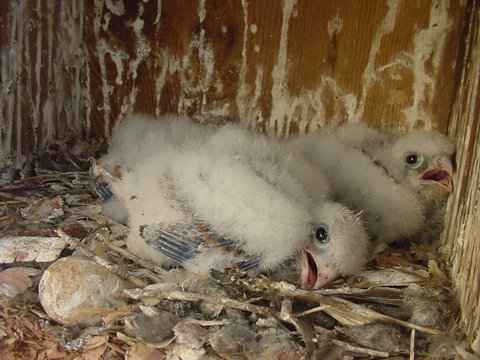 A view up the cut
This shot is a closeup of the route going north up to Hewitt Road. You can make out the trailers parked at the top which are in my previous Hewitt Road shots.

You can also see the steep slope it goes up, and which PennEast will be widening. The runoff from the extended cut will be going right down into Carla’s farmland. 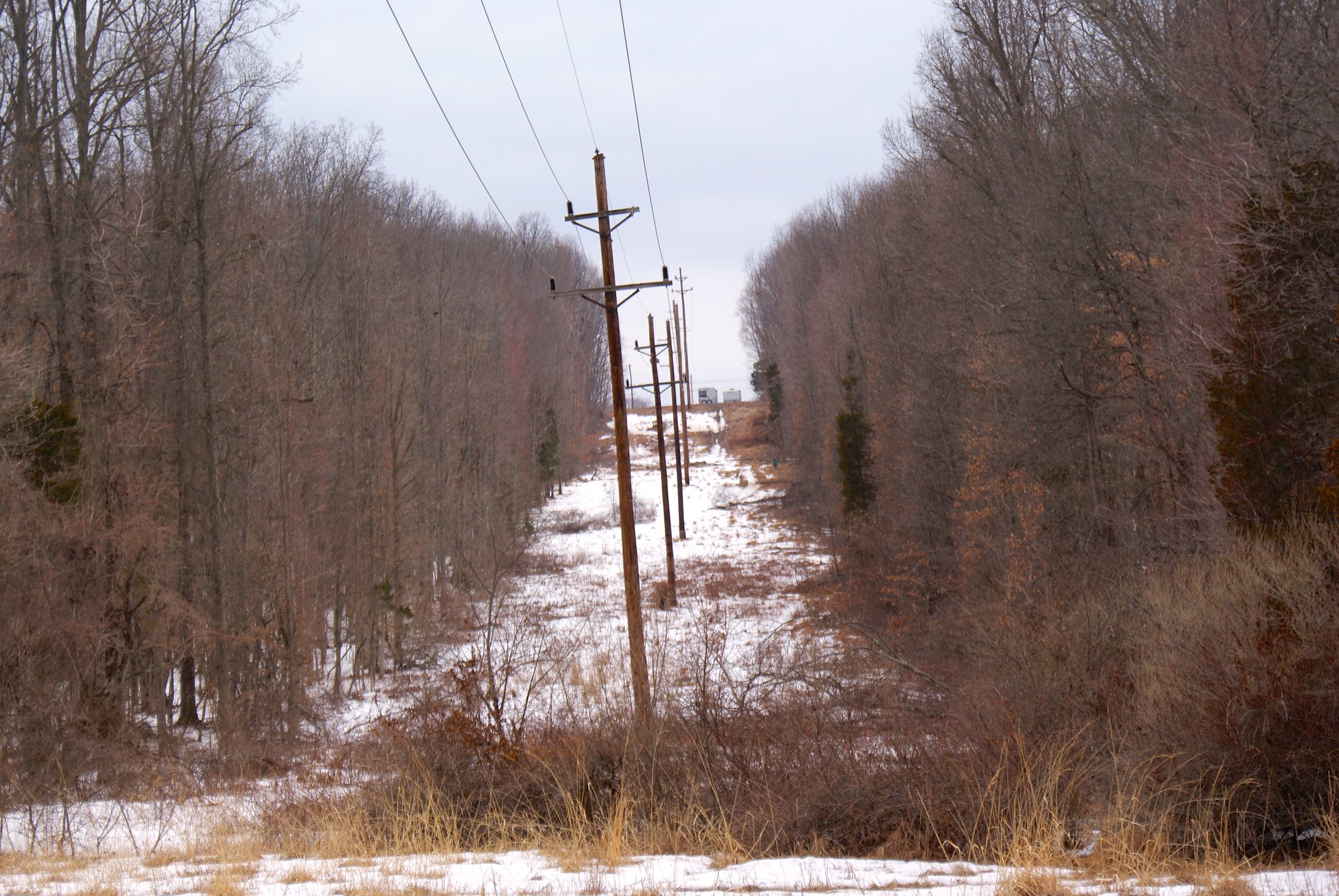 The house
A view of their house. The pipeline will be running just a couple of hundred feet, well within the zone where spontaneous ignition of flammables will occur if there is a pipeline accident. 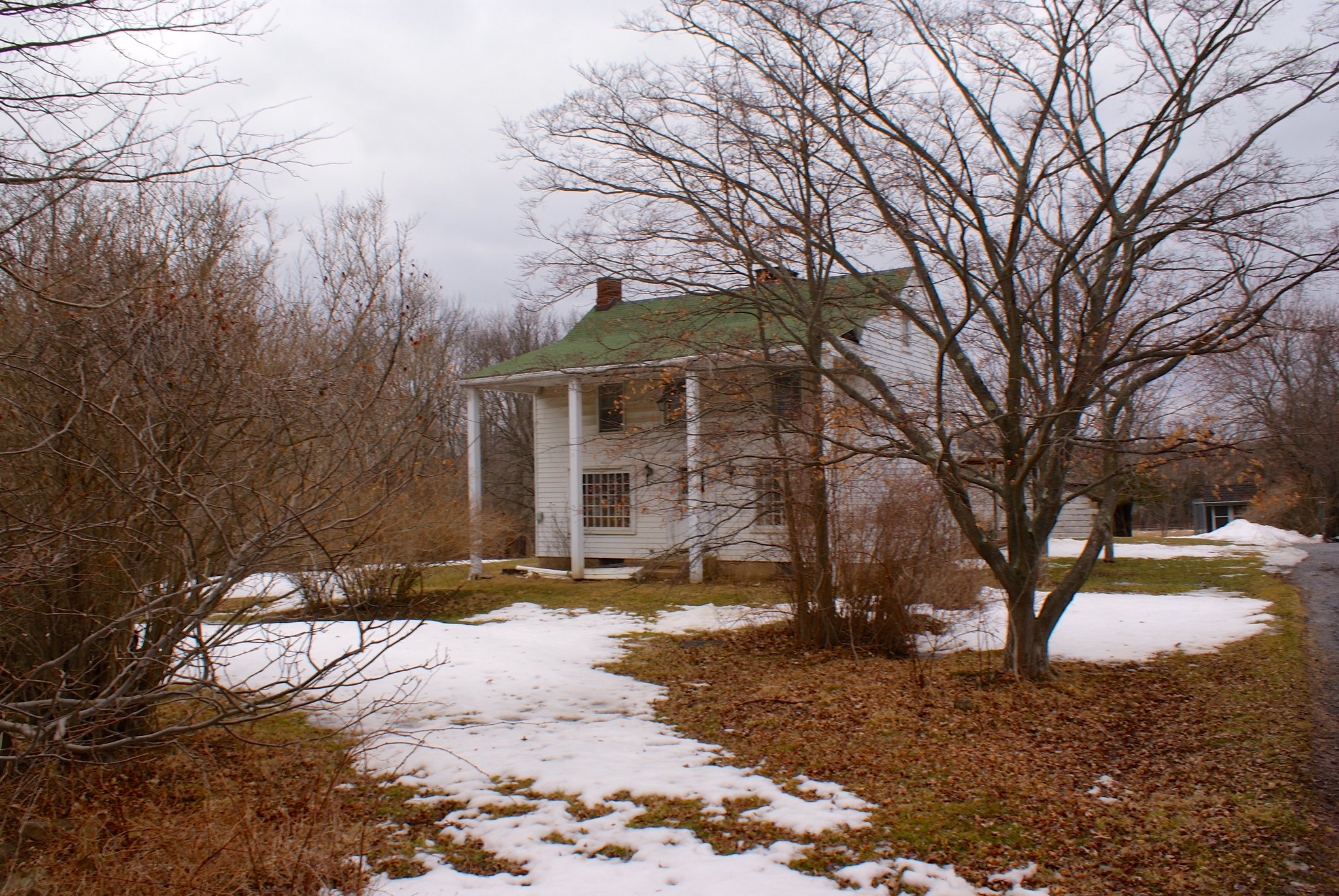 Driveway view
A view from their driveway. You can see the pipeline route cutting right across it, cutting off access to their property during construction. 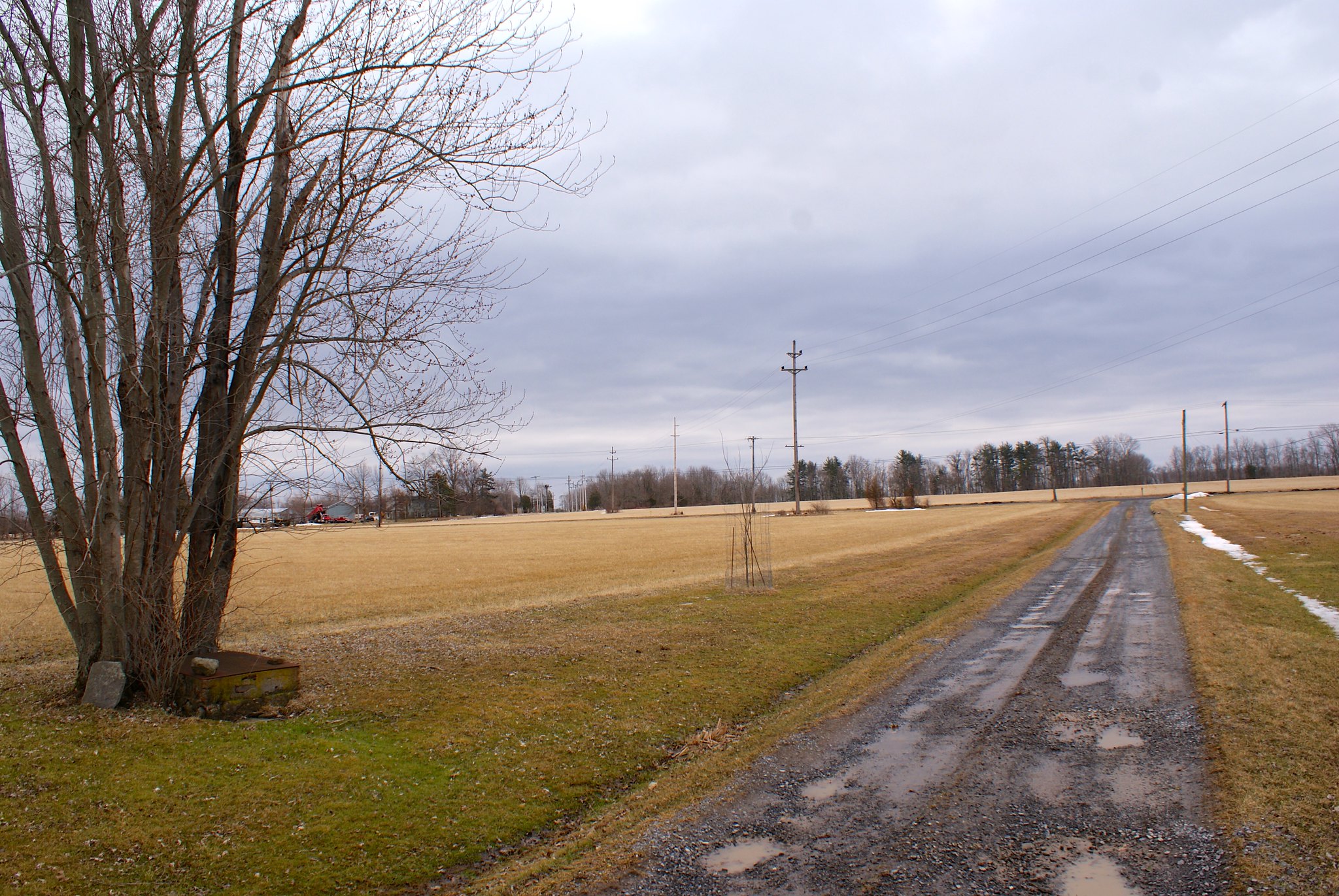 Final house view
A final view of the house. You can see my wife’s Jeep in the driveway on the right. It looks like some old growth trees may be in jeopardy if they build through here as well. 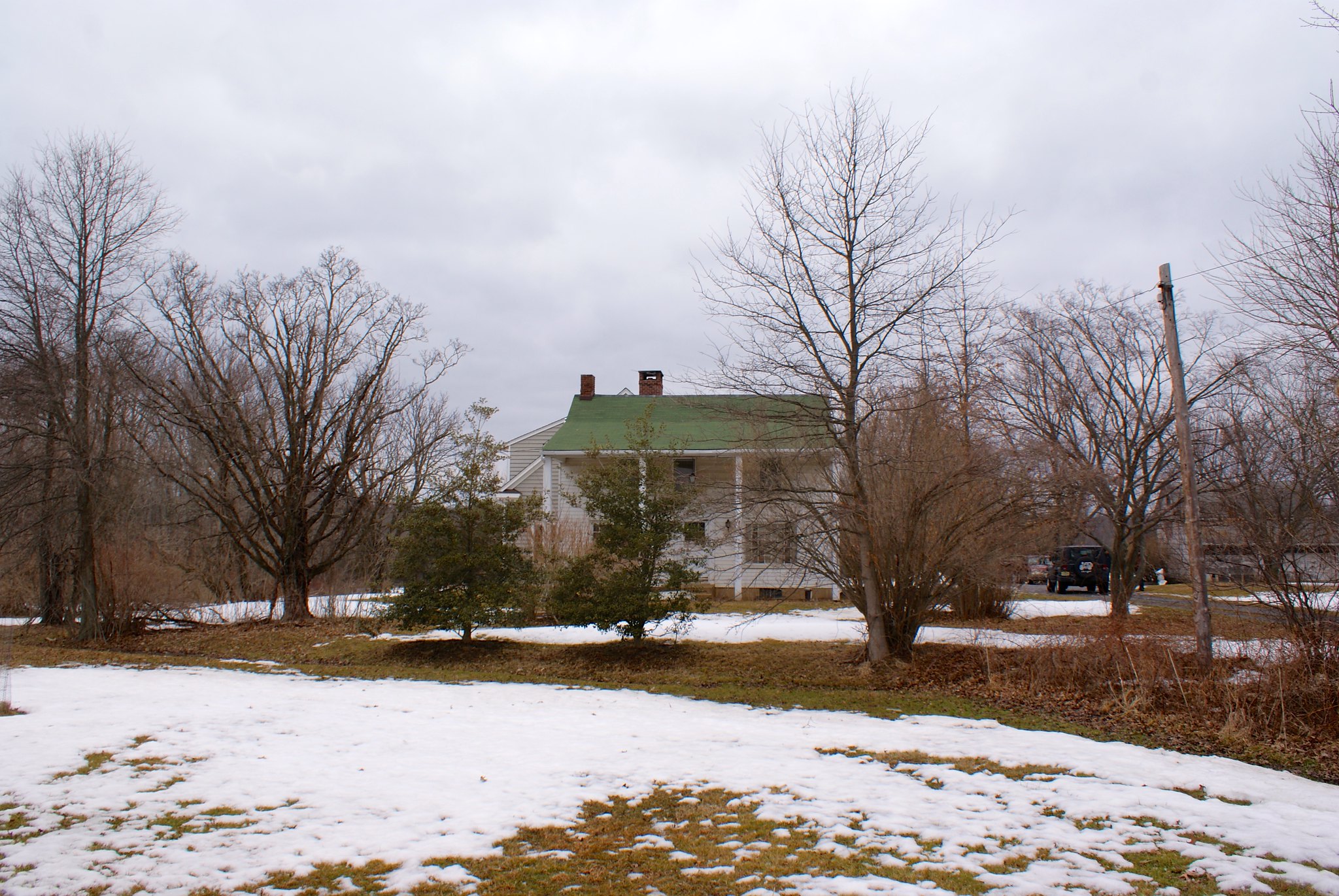 My two helpers
I’ll close with shots of two of my helpers, Fern and Cinna. Fern is 100% American Foxhound on one side, and it really showed today. The farm had droppings from several different critters – we saw deer and fox, and the fox had her heart racing. It was an effort to keep her under control in the slippery conditions, but we managed. Carla helped out when I was taking pictures, for which we are very grateful.

The purpose of highlighting properties like this is not to make a NIMBY case against the pipeline. Rather, I think this shows how little planning pipeline companies put into laying out these routes. It would be hysterically funny to highlight all of the bad routing decisions made along this path – if it didn’t impact so many lives so severely.

PennEast has shown their incompetence in planning out a pipeline route. Do you have any confidence at all that their skill at actually building it will be any better? 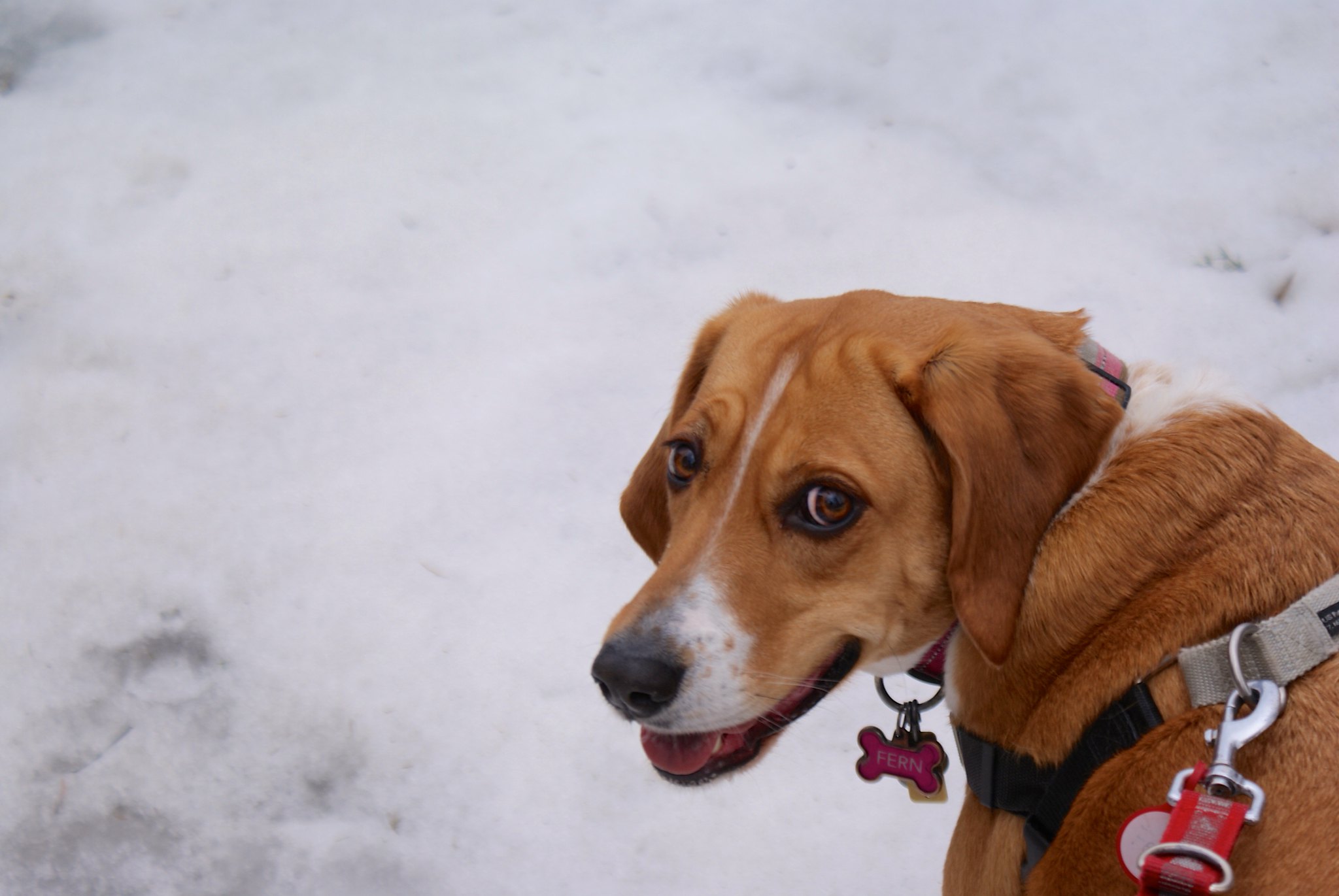 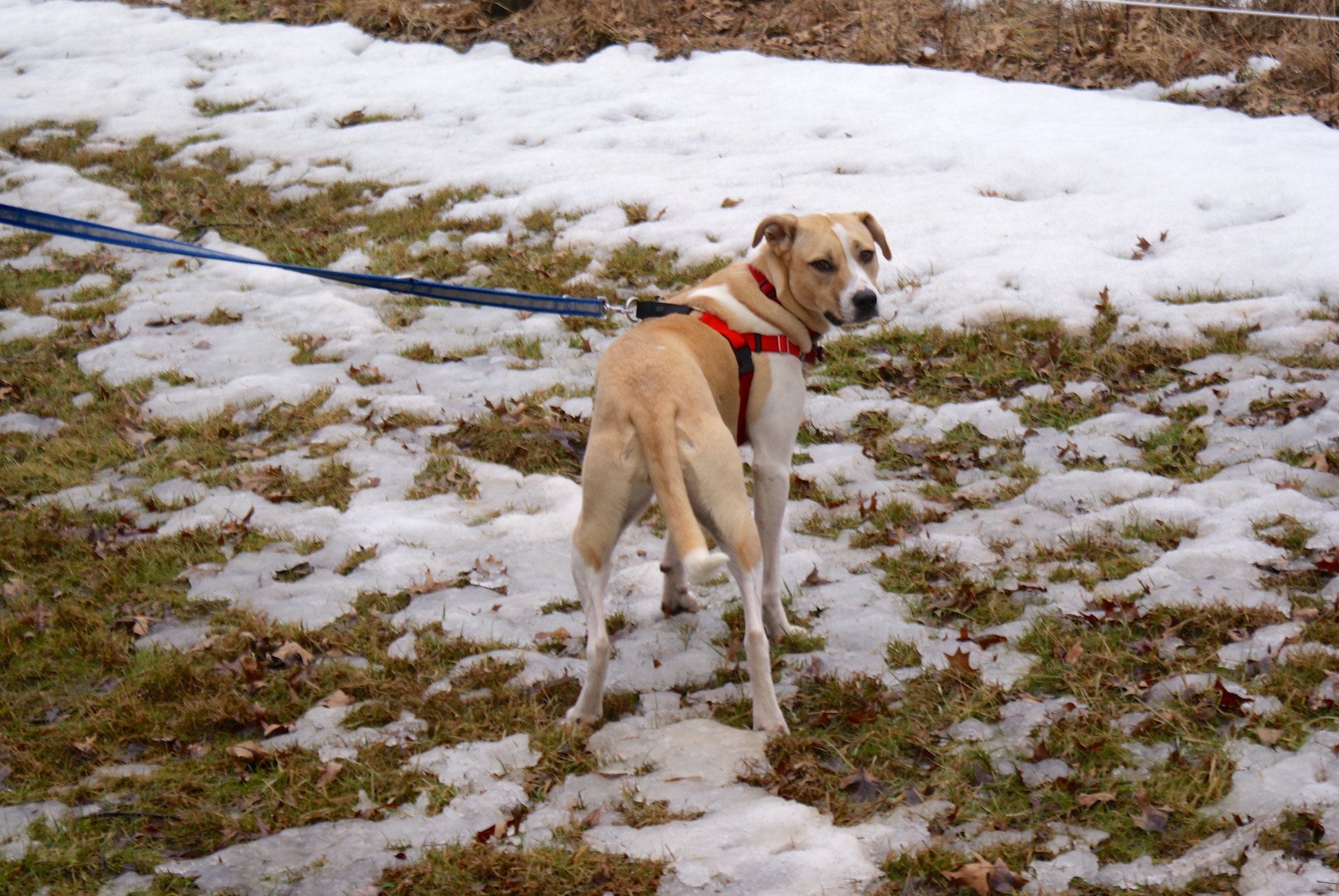